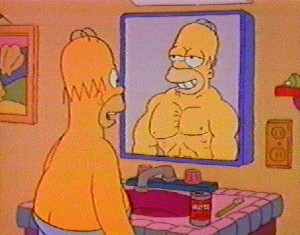 I was a dancer. I went to school for theater and dance; I studied ballet, jazz, modern and even did ballroom/latin. Dance is my first passion. I took pride in my dancers’ form and I walked with an air of confidence that dancers earn from years of training. I also had some issues with eating disorders and kept my weight within the range of 100 lbs and 135 lbs. When I hit 35, my weight started to go up and down, but it never got truly out of control until after 40. Even at that point I never considered the possibility that I could be obese.
I actually had a sign I had a weight problem the summer of 2011, but I was in denial. I went to a doctor in Beverly Hills who insisted I needed Bariatric surgery. He humiliated me, and accused me of lying about my diet.  On my walk home I was in tears, and I was suddenly startled when I was approached by the famous director Quentin Tarantino. He asked me for a business card and stated he was interested in me for a movie he was filming. I did not give him any information and totally botched what could have been a pivotal moment in my life, all because of what happened earlier in the day with the fat-shaming Beverly Hills doctor. Even after that moment I did not believe I could be that person, a person who was on the far side of fit. I just felt I was just a little chubby.
I am a poet, and I was attending an open mic in Hollywood with some friends in 2013. My photographer friend Xiomara offered to take some photos of me standing at the mic reading my poetry. I felt on top of the world that night; it was my first reading since moving from NYC to Los Angeles and my poetry really resonated with the audience that evening. It was time to shine, or so I thought.
Later that week Xiomara emailed me the photos, and I could not believe my eyes. I was looking at my own image, and the person in the photo was a stranger to me. Who was she? I did not recognize my own face and body, and I was mortified that I let myself get to the point of obesity. That was the last reading I attended.
I took a self-esteem dive right into the oblivion of insecurity and body hatred: 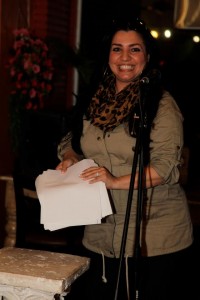 It was months until I was ready to take action: months of feeling terrible about myself, months of overeating and under-exercising. It was months before I faced the dreaded scale.  I let myself sink further before I was ready to make a change. The change came in an idea — an idea that came from my writer and humanitarian side of my personality.

I wanted to start a blog.
I actually had two blogs working but the missing link was something to strive for: a journey, a path.  I also realized how much I loved giving back in the past. Yes, I gave back in little ways daily to random people I encountered. A sandwich for a homeless man, a donation to an animal rescue but I wanted, or I needed to do more. I remembered how I planned Downward Dog For Cats back in 2012, a yoga event in Los Angeles to raise money for a local animal rescue. It was like a light bulb flashed inside my  myopic mind. I gave more to others than I gave to  myself. I was putting myself last and trashing my temple. I thought what if I were to combine my philanthropic ways with a weight loss regimen and blog about my experience.
I decided to sponsor a charity with every ten pounds I lost, contacting the charity before I lost each ten pounds. I was now accountable — and going public with my journey — so I thought there was no way I could fail. I decided to be completely transparent: sharing my weight which was 210 lbs and before photos, basically sharing my whole life.
My idea was met with such enthusiasm, I was offered training from a co-worker turned friend named Mike. I was cast in a Richard Simmons video, the beginning in July 2013 started off on such a hopeful note. I would lose weight, help others, and have a blast doing it. I would have no fear, and be impeccable with my word. When I said I would do something, I did it.
My journey became a thrilling adventure and I lost 50 lbs and did things I would have never assumed I could do at this time in my life. I ran a 5k, missed the turn and completed a 10k. I did yoga on a heli-pad on a rooftop in LA. I have loved every minute of the ride, met some beautiful souls along the twists and turns of my road less traveled, and I am humbled that I have had the chance to do my little part to make a difference.
Now I find myself at a crossroads,after moving from West Hollywood to Houston Texas. I am continuing on my never ending quest to for fitness, philanthropy and feeling fearless and high on being alive. I am far from an after, but so much better than I once was before. All with a little help from my friends.